KATHMANDU: The retail price of onion climbed to a record high of Rs 230 on Tuesday, in a sharp jump by Rs 30 per kilo in a single day. The vegetable sold for Rs 200 per kilo on Monday. 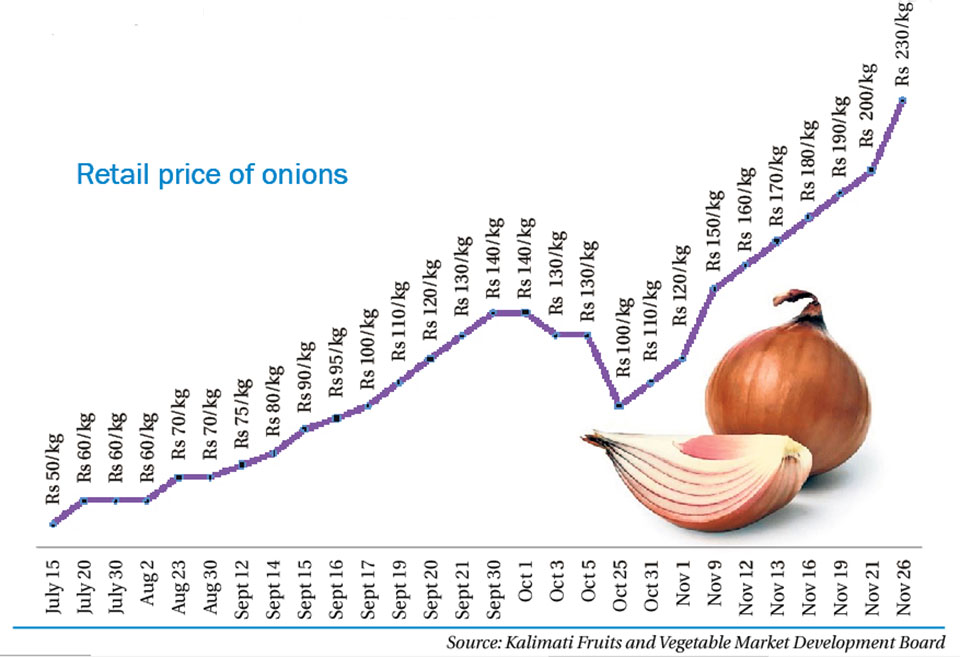 Amid acute shortage of onion following a recent ban by India on export of the vegetable citing low harvest, the price of onion has been rising rapidly in Nepal for the last two months. Nepal relies on the southern neighbor for almost 98% of supply of onion, an essential kitchen item for Nepal’s households.

The spiral-like price rise of onions is bringing tears in the eyes of its consumers who have observed the cost of everything going up in recent months.

However, government officials say that there was nothing that they could do immediately to check the price. Rather, they have a tip to the consumers: stop consumption.

“We should now stop consuming onions. The price of onion is not in our hands as we rely on India for its supply. Since the price of onion is increasing in India itself, we cannot do anything to control the price here,” said Binaya Shrestha, deputy director of Kalimati Fruits and Vegetable Market Development Board. “The import of onion has almost stopped. Smuggled onion is not enough to meet the soaring demand in the domestic market. Our domestic production is paltry. Against this context, we can do nothing except to ask consumers to stop or lessen onion consumption,” he added.

On September 29, the Indian government banned export of onion as the country faced shortage of the crop owing to a sharp decline in the harvest. According to the Indian media, heavy rainfall this year destroyed the crop, resulting in the shortage.

According to Shrestha, there is a supply of only 35 tons of onion in the country compared to the demand of over 270 tons daily in the Kathmandu Valley alone.

He, however, was quick to add that the government had a role in intensifying market monitoring to prevent unnecessary price hike or artificial shortage. He also said that increasing the domestic production should be a long to medium-term strategy to get rid of shortage or price shocks.

“Imports are always costlier. Now, we need to learn a lesson from this situation to focus on production of onion in our own country and be self-reliant,” said Shrestha.

While import from China has been an option to ease the supply shortage and price hike, traders say that most of the consumers do not prefer Chinese onions.

“Chinese onions are larger in size and have a lot of water portion in them. The taste of Chinese onions is not preferred by Nepali people,” said a vegetable supplier.

Sarmila Silwal, 40, a homemaker from Jadibuti in the Kathmandu Valley, said: “I have stopped inquiring about price of onion as there is no way that its price will decrease. I have stopped using onion in my kitchen, and I use other things in its replacement.”