Health facilities’ reluctance to abide by the rules is putting public health at risk and polluting environment, experts say. 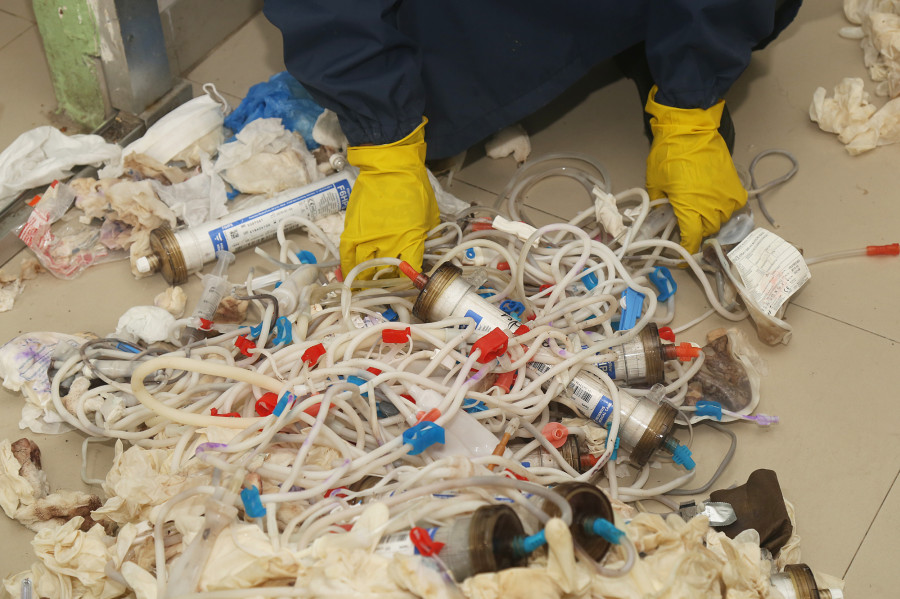 The practice of burning, burying and disposing of hazardous immunisation waste mixing up it with the municipal waste by private hospitals has continued unabated, a report published by the Ministry of Health and Population shows.

The study, “Assessment of Immunisation Services in the Private Sector in Kathmandu Valley”, carried out by a consortium of Atlanta’s Center for Disease Control and Prevention, Johns Hopkins University, John Snow Institute and the Health Ministry, shows that health facilities in Kathmandu Valley have been jeopardising environment as well as public health by defying the rules that prohibit burning, burying and disposing of hazardous immunisation waste with the municipal waste.

"Burning and burying as well as disposing of hazardous immunisation waste together with the municipal waste are all prohibited by law, as the practice not only pollutes the environment but also puts public health at risk," Dr Shyam Raj Upreti, who led the study, told the Post. "Only 7.7 percent of private health facilities are found practising disinfection and recycle method, which is the best practice."

The World Health Organization says hazardous waste poses many health risks such as the potential to inflict physical injury [stabs from sharps such as needles], chemical burns, toxic exposure to pharmaceuticals, radiation exposure, and exposure to infectious and disease-causing microorganisms.

As per the Solid Waste Management Act 2011, health facilities should segregate all kinds of waste, including infectious biomedical, at the source, and dump them separately. Hospitals should treat their waste by autoclaving or chemical sterilisation before dispatching it out of their premises.

Article 18 of the Environment Protection Act 1997 says individuals and facilities that put public health at risk can be slapped with a fine up to Rs2.5 million.

Upreti said that most of the private hospitals, where the study was carried out, are not following the waste management rules.

"Disinfected hospital waste poses a serious risk of spread of deadly diseases such as HIV, Hepatitis B, Hepatitis C, tuberculosis, tetanus and many others in the community," said Upreti. "Concerned agencies should strictly prohibit such waste disposal practices."

A separate study carried out by the Ministry of Health and Population in the past shows most of the private hospitals housed in rented residential buildings and lacked proper hazardous waste management systems.

Due to the apathy of the concerned authorities to prohibit the practices of burning, burying and disposing of hazardous immunisation waste along with the municipal waste, cleaning staff working under the environment department of the metropolitan city have been risking their health and sometimes their lives at their jobs.

The Environment Department under the Kathmandu Metropolitan City said that it has been regularly penalising the private, community and state-run health facilities for discarding hazardous hospital waste on the roads and mixing them with the metropolis waste.

"Even the state-run health facilities have been throwing hazardous waste on the roads," Hari Kumar Shrestha, chief of the department, told the Post. "We have fined some hospitals and warned them against repeating the mistake in future."

According to data provided by the department, the metropolis fined Rs 293,500 to various private, community and state-run hospitals since the beginning of the ongoing fiscal year 2019/20.

The department, however, refused to divulge further details, as to which hospitals were penalised, raising suspicions about the agency effectively carrying out the monitoring.

Last year, too, the department had penalised several hospitals, including Paropakar Maternity and Women's Hospital in Thapathali, Sukraraj Tropical and Infectious Disease Hospital in Teku, Nepal Army Hospital and TB Hospital in Kalimati, for discarding waste in metropolis waste.
There are 1,445 private health facilities—hospitals, nursing homes, polyclinics and laboratories—in the Kathmandu Valley.

Megnath Dhimal, chief researcher at Nepal Health Research Council, said that burning of medical waste is the worst idea as it can produce dioxin, furan and other hazardous chemicals, which can even cause cancer.

He said that pathological waste contains harmful microorganisms— bacteria and virus—which can be easily spread in public, if not managed properly.

"It’s not that the country lacks laws, rules and regulation," said Dhimal. "The problem is in their strict enforcement."

According to Dhimal, all concerned government agencies need to make concerted efforts to make all the health facilities abide by the laws.

"Private health facilities in Nepal may have made service delivery their priority, which is commendable, but waste management is also an equally important aspect of overall healthcare services,” said Dhimal. “Unless hospital waste is properly managed, the public is always at a risk of contracting diseases.”