Provinces have achieved only 1.18 percent progress in development spending in five months

KATHMANDU : While the newly-implemented federal system of governance was expected to expedite development works, budget spending figures of provincial governments suggest that they are also struggling to boost their expenditures. 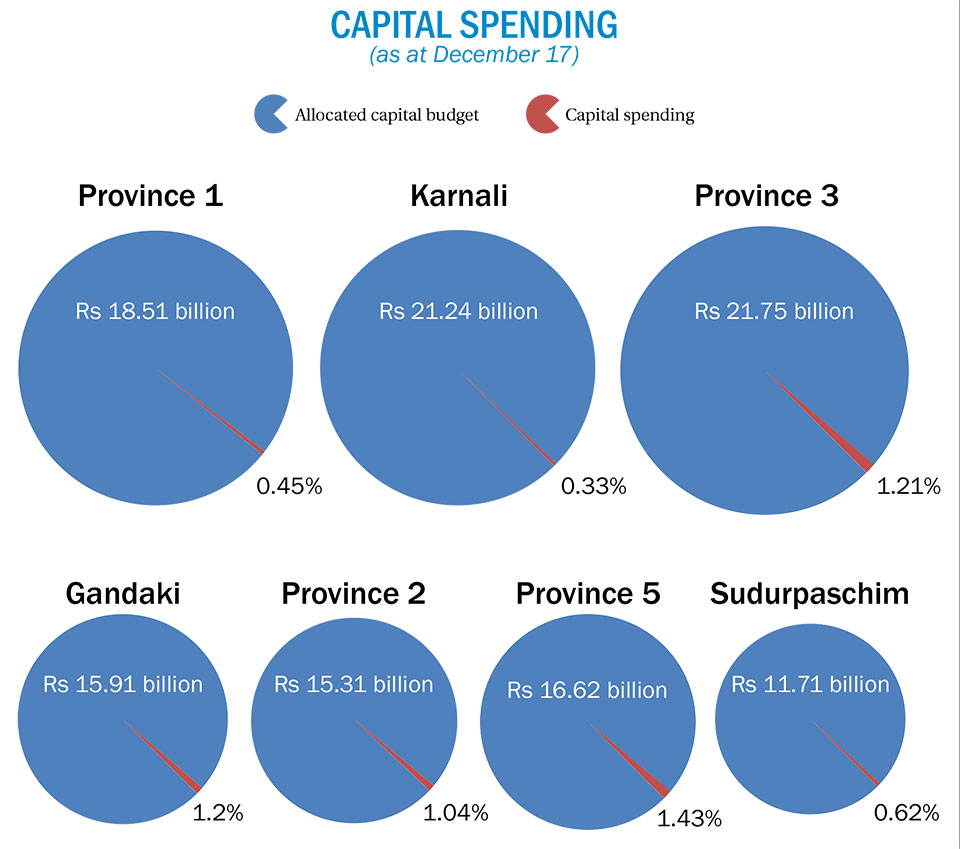 A tally of the province-wise budget and the spending data maintained by Financial Comptroller General Office (FCGO) shows that seven provinces made progress of only 1.18 percent toward capital expenditure in the first five months (as at December 16) of the current fiscal year – FY2018/19.

Of the combined budget of Rs 206.8 billion brought by seven provinces, Rs 121.06 billion have been allocated for capital expenditure in the provinces. However, they have been able to spend only Rs 1.076 billion in the first five months the current fiscal year.

But, provincial finance ministers say that the slow pace of spending is not ‘unexpected’.
“We don’t have implementation units as the federal government is yet to hand over such units to us,” Indra Bahadur Aangbo, Minister for Economic Affairs and Planning of Province 1, told Republica, referring to offices and mechanisms required for implementation of the budget.

“We did not have our own staff and still we don’t have adequate manpower. So, there is no point in debating whether the spending has been satisfactory,” he added.

Province 1 has one of the lowest capital expenditures with the provincial government spending only 0.45 percent, or Rs 82.7 million, out of Rs 18.5 billion allocated for capital expenditure. Similarly, Gandaki Province has been able to spend only 1.2 percent of its capital budget. The province has allocated a total of Rs 15.9 billion for development spending while its total budget is Rs 24 billion.

Minister Aangbo said that the provincial government has not been able to start tender process for development projects in the lack of implementation units. “The federal government has not handed over road division while the budget allocated for road projects is highest. Same is the case with drinking water office, tourism office and education office to implement the budget,” he said, explaining the slow budget spending.

“It’s naive to expect much from provincial governments, which still do not have adequate mechanisms, human resources and policies required for the execution of development projects, at a time when the federal government itself is failing to increase development spending,” he added.