Over 400 Nepalis were deported to Nepal last month after local authorities accused them of not abiding by government measures while tens of thousands of Nepali workers continue to live in squalid labour camps in Qatar. 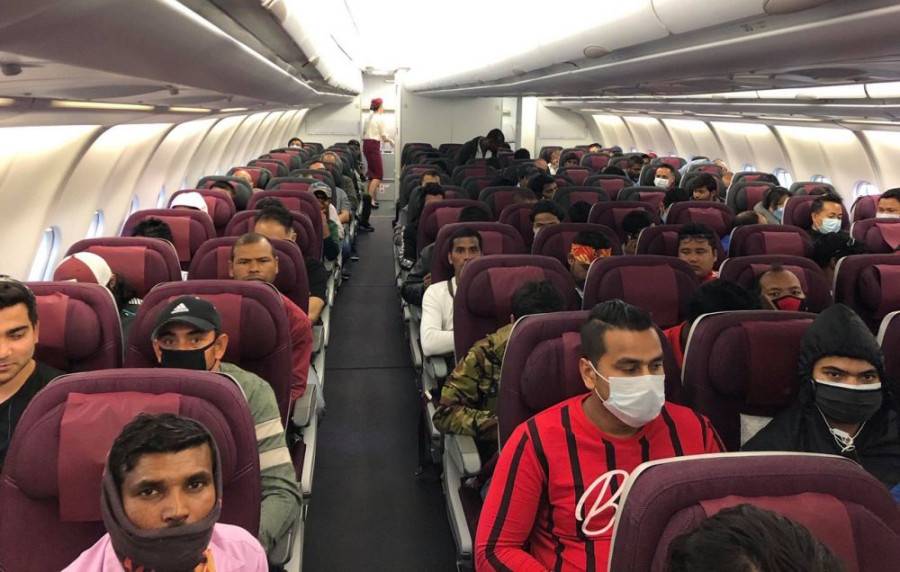 The Qatari authorities used the global health pandemic of Covid-19 as a cover-up to expel Nepali migrant workers illegally, according to Amnesty International.

The human rights advocacy group has accused the Qatari authorities of rounding and expelling dozens of migrant workers after telling them that they were being taken to be tested for Covid-19 in March.

Amnesty International said on Wednesday it had interviewed 20 Nepali male migrant workers who were apprehended by Qatari police, alongside hundreds of others, last month.

According to the organisation’s statement, the detainees were told by the police that they were being taken for Covid-19 tests and would be allowed to return to their accommodation afterwards. However, they were taken to the detention centre and kept in appalling conditions for several days before being deported to Nepal.

“None of the men we spoke to had received any explanation for why they were treated this way, nor were they able to challenge their detention or expulsion,” said Steve Cockburn, Amnesty International’s Deputy Director of Global Issues, in the statement. “After spending days in inhumane detention conditions, many were not even given the chance to collect their belongings before they were put on planes to Nepal.”

Last month, more than 400 Nepali workers were deported to Nepal after the local authorities accused them of violating the Qatari’s government measures of containing the virus.

According to the rights group’s research, on March 12 and 13, hundreds of migrant workers were rounded up and detained by police in parts of Doha including the Industrial Area, Barwa City, and Labour City while they were away from their accommodation, carrying out errands or shopping for groceries.

Some of these workers told Amnesty International that the police specifically told them that they were being taken for coronavirus tests and would be brought back to their accommodation later. Other workers shared that the police spoke to them in Arabic, and the only word they could understand was ‘corona’.

“We were asked to stop to test for the virus. Police told us that the doctor would come and check the virus. But they lied to us,” one of the 20 Nepali workers interviewed told Amnesty International.

Nepali migrant workers were then crammed into buses and taken to a detention facility in the Industrial Area where their documents and mobile phones were also confiscated, before having their photographs and fingerprints taken, according to the human rights group.

These workers were detained in inhumane conditions alongside scores of migrants from various countries. They were held in overcrowded cells without beds or bedding, and not given enough food or water. Out of the 20 interviewed by the Amnesty, only three said they had their temperature checked while they were kept in the detention centre.

“The jail was full of people. We were given one piece of bread each day, which was not enough. All the people were fed in a group, with food lying on plastic on the floor. Some were not able to snatch the food because of the crowd,” said another Nepali worker, according to Amnesty International.

Since the outbreak of Covid-19 has gripped the gas-rich nation, labour camps where thousands of workers, including Nepali workers, live in squalid conditions have turned into ‘coronavirus prison’.

Workers are not allowed to step out of these camps where scarcity of basic needs, poor hygiene and overcrowded accommodation facilities have forced these workers at higher risk of coronavirus infections.

“It is disturbing that the Qatari authorities appear to have used the pandemic as a smokescreen for further abuses against migrant workers, many of whom feel police misled them by saying that they were to be ‘tested’. Covid-19 is no excuse for arbitrarily rounding people up,” said Cockburn.

Qatar has remained one of the most favoured labour markets for Nepali workers for years. Currently, Qatar hosts more than 400,000 Nepali migrant workers most of them are working on construction sites in the 2022 FIFA World Cup hosting country.

After cases of Covid-19 started multiplying in the industrial area and the camps, Qatar, in its desperate attempts to control the spread of contagious diseases, sealed off the workers’ camps and those ignoring measures were met with deportations.

Some of these Nepali workers had come to know about their deportation only while being taken to the airport. These workers were not even given adequate time to collect their belongings while others were not given the chance to collect anything at all.

“I was handcuffed and treated like a criminal. I was taken to my camp to collect belongings, but how could I collect and pack the luggage since my hands were chained?” said another Nepali worker, according to Amnesty.

The human rights advocacy group has called on the Qatar authorities to ensure that any worker detained and threatened with expulsion is informed of the reasons and allowed to challenge them. Furthermore, it urged that Qatar should also ensure effective remedy and reparation for any worker whose rights have been violated.

The Qatari authorities must also ensure all migrant workers’ right to health is fully protected during the Covid-19 crisis, said the statement.

“The authorities must provide reparations for the way that these men have been treated, and consider allowing those who have been expelled to return to Qatar if they so wish,” Cockburn added in the statement. “The men’s employers must also urgently pay the salary and employment benefits they are owed.”