SIRAHA, Nov 13: A dam constructed for irrigation purpose in Khuttimadyan River in Dhangadhimai Municipality-12 of Siraha collapsed five months after it was built. 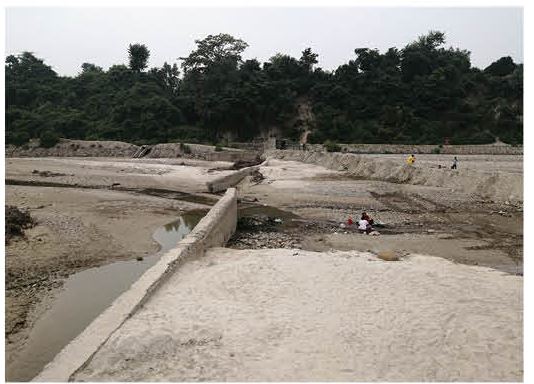 The dam collapsed in August after the river swelled up due to monsoon rains.

The dam was built with the aim of irrigating 300 bigha of farmland. Water Resources and Irrigation Development Division Office, Siraha, had built the dam with an investment of Rs 42.5 million. It had awarded the project to Rautaha Construction of Udaypur on January 23, 2017. The construction company completed construction of the dam earlier in February. But it collapsed five months later.

Locals suspect the dam might have collapsed due to use of substandard construction materials.

The divisional office paid the company Rs 29.3 million in the first installment. It paid an additional Rs 2.76 million after the work was completed. Similarly, it released Rs 1.3 million to consumers' committee to build irrigation canal.

Indra Bahadur Bayalkoti, a local farmer, suspects irregularities in project planning to construction process. "We were very happy when construction work began. But our happiness was short lived as the structure collapsed in just five months," he said, adding: "We had not suspected the structure to be so weak." The fact that the dam couldn't withstand a normal monsoon flood suggests at irregularities and use substandard materials, he added.

"The contractor did all the concrete works during nighttime. We noticed something was wrong and informed the divisional office accordingly. But no action was taken," Shyam Tamang, another local, told Republica. "Now, the dam has collapsed before we could use it."

Locals claim that officials of divisional office and the contractor are involved in the irregularities. "We couldn't find steel in the debris of the dam. It explains why the dam collapsed," another local said.

However, Ram Ekwal Sah, site engineer of the project, said the structure collapsed due to defects in the design. "Also, water flow in the river was higher than our expectation. The dam collapsed because it couldn't withstand the heavy flow," he added.

He said the contractor will have to repair the dam as it collapsed within a year of its construction.