The Nepal earthquake disaster launched a global humanitarian effort in 2015. Even as the dust still settled, space-based information aided the nation's recovery… and watched for new hazards.

"All of a sudden it seemed like as if the ground had dropped away and then everything around us started shaking… It was impossible to try to stand and escape from there."

Selina Shakya, a native of Kathmandu, was visiting the Nepalese city of Pokhara when the quake struck. "I had experienced a quake before, but not that big where you see buildings falling… and whole districts just vanished into dirt."

A massive 7.8-magnitude temblor, the Gorkha earthquake struck just before noon local time on April 25, 2015, along the boundary where the Indian plate underthrusts the Eurasian plate. Lasting less than a minute, the initial earthquake left approximately 9,000 people dead, with additional quakes and aftershocks continuing for months.

After the Shaking Stopped

Immediately after the Gorkha quake, efforts to assess the damage and start the recovery came from across the globe. David Green, Earth Science's Disasters manager, led the NASA response across our Centers. In a coordinated effort, people began gathering satellite information on the destruction from both domestic and international sources to disseminate to partners that needed it most, such as USAID and USGS, as well as in-country partners like the International Centre for Integrated Mountain Development (ICIMOD), located in Kathmandu. (icimod.org)

"In a disaster situation like the one Nepal faced, collecting, managing, processing, and disseminating timely and reliable information becomes critical to relief and recovery operations." David Molden, Director General, ICIMOD

This unprecedented approach tapped many resources including Landsat satellites, the Earth Observing-1 satellite, the Advanced Spaceborne Thermal Emission and Reflection Radiometer instrument aboard NASA's Terra satellite, as well as DigitalGlobe satellites and image mosaics. This crucial optical data helped initially determine what regions were damaged or destroyed by the quake, and where to target relief efforts.

Helping this rapid flow of information was ICIMOD's already-established presence in the region. To aid recovery and speed assistance, ICIMOD gave frequent briefings to Nepali government agencies, including the Ministry of Home Affairs. They also provided high-resolution printed images of the quake damage. These paper maps were critical pieces of support as the nation had limited Internet service, which at times delayed the immediate information the nation desperately needed. 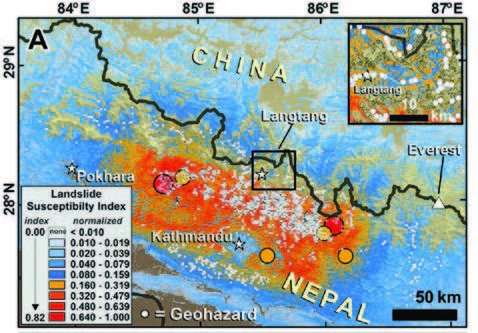 In addition to the initial destruction of the Gorkha earthquake, the region had yet more risks to consider—additional hazards spurred on by the quake and its aftershocks. Those threats included landslides and avalanches, as well as flash flooding caused by blocked rivers and breached glacial lakes.

As a partner in NASA's disaster-relief response, the University of Arizona organized a team of scientists—a volunteer network with people across nine nations—to identify where landslides occurred in earthquake-affected areas of Nepal. In the immediate weeks after the quake, the team used spaceborne and ground observations to collectively map more than 4,300 landslides.

Smaller subgroups of the volunteer network focused on assessing and communicating the disaster, creating damage proxy maps, and producing vulnerability maps that showed potential risks. Jeff Kargel, a glaciologist at the University of Arizona, co-led one subgroup with NASA scientist Dalia Kirschbaum, called the "Induced Hazards" team. This team concentrated on identifying the landslides and other hazards triggered by the quake, as well as guiding relief efforts.

In one instance, a colleague of Kargel's at ICIMOD alerted him in the middle of the night to an urgent situation facing the village of Beni, located at the confluence of the Kali Gandaki and Myagdi Rivers. That village was one of several downstream from where a landslide dam had built a sizeable lake in the river flow. The colleague asked Kargel to use the data he'd collected to provide calculations of downstream flooding if the landslide dam were to break. Within a matter of hours, Kargel relayed that information and authorities evacuated the villages.

As Kargel feared, the landslide dam did give way. "An outburst flood roughly matching my numbers washed away one village and came lapping up onto Beni," he said. "Nobody was killed, though one small village was destroyed."

A Long Path to Recovery

In the months following the earthquake, the volunteer network knew more hazards were still potentially ahead. Aftershocks still jolted the region, and the monsoon season was coming. With the ground already unstable from the quake, the likelihood of landslides would be much higher when the rains came.

The team shared its mountains of data with ICIMOD, which in turn advised the Nepali Prime Minister and his cabinet of the new hazards they faced. "The briefing was well received," said Kargel, who added that it opened the government's eyes to the "uses of remote sensing in the earthquake response."

As the relief efforts continued, Selina Shakya remained optimistic: "My hope for my country is to rise again and with everybody's great effort we will build our nation even better. I know it might take us a very long time… but I haven't seen the people of Nepal losing their hopes. They are tirelessly working to reach out to people in need."

More than 75 people and organizations contributed to NASA's response to the Gorkha earthquake and associated hazards.