The Nepali footwear industry faces the second month of the virus lockdown with empty coffers and payday looming ahead. 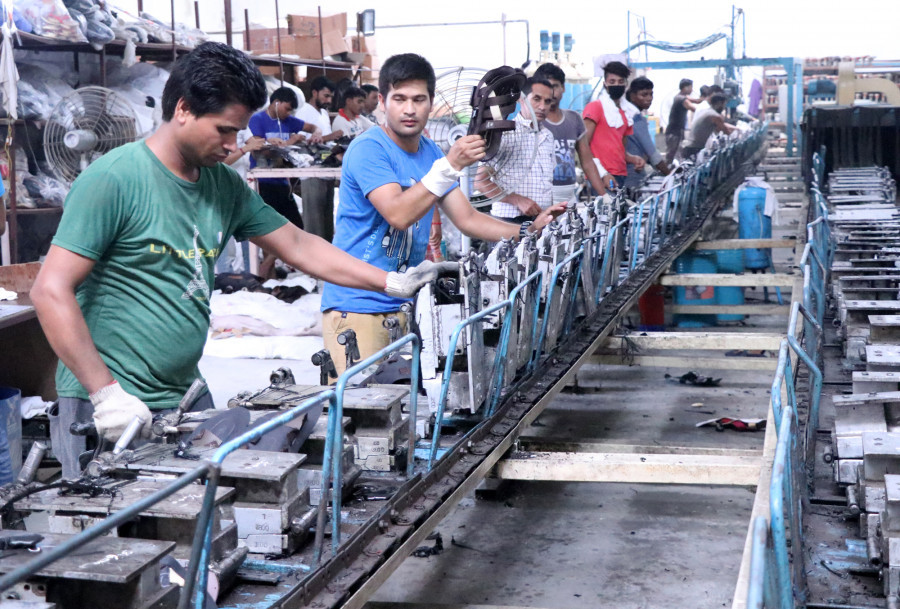 The coronavirus has come as another blow to the country's shoemakers—already struggling in a market half of which is dominated by imports—as the economic standstill cuts off revenue while expenditures continue to mount.

Krishna Kumar Phuyal, president of the Footwear Manufacturers Association of Nepal, said the footwear industry was racking up losses of Rs30-40 million daily as production and sales have ground to a halt.

According to the association, most of Nepal's imports of sports and leather shoes come from China. The country's footwear requirement amounts to 80 million pairs annually, half of which is fulfilled by domestic manufacturers.

There are 1,500 large and small shoes factories in the country which provide 50,000 jobs, said the association.

“I have been informed that most of them have paid the staff salaries for March. The industry is facing a manpower crisis as it is, and we cannot let the workers down,” he said. "We are holding talks with the government and different umbrella organisations about the payment of salaries for April."

Phuyal said it would be six-seven months before the industry gets back to its old self even after the pandemic stops.

“There are chances of footwear companies running short of capital, so banks and financial institutions should provide financial relief, and the government should come with some provision towards this end,” he said.

Phuyal added that they had no plans to restart production anytime soon with cases of infection surfacing daily. "What's the point in making shoes when the market is all closed?"

Prasain said they were already encountering a shortage of raw materials from China which stopped arriving right before Chinese New Year.

He said the company had paid the salaries of employees having a bank account in full, but those who have returned to their home towns have not received their pay. Shikhar Shoes has 250 employees.

The readymade garment industry too is reeling from the virus lockdown, industry insiders say.

According to Chandi Prasad Aryal, president of the Garment Association of Nepal, the lockdown has resulted in a loss of Rs1.25 billion, and garment manufacturers are in no position to pay their employees.

Nepal's apparel industry has an annual production capacity of 6-7 million pieces, and a total investment of Rs6 billion.

The association has asked the government to contribute 50 percent of the salaries of the workers for the month of Baisakh. It has 54-55 garment factories as its members.

He has finished garments worth Rs15-20 million piled up in his warehouse which he can't export or sell domestically because of the virus closure. He is running low on the raw materials imported from India; and after they are gone, he will have to shut down production, he says.

Maharjan had a monthly turnover of Rs1 million, but sales were down to zero in the last two months. He owes Rs6-7 million to his bank, and has administrative operating expenses. “I am in trouble. I don’t know how to manage all the costs with no business,” he said.

Maharjan paid the salaries for Chaitra in full to employees who came to work regularly. Those who were not able to come to work received half of their pay.

The major markets for Nepali readymade garments are Canada, Europe, Australia and India which accounted for 90 percent of all shipments.

Following the Covid-19 outbreak in these markets, Nepali manufacturers face an uncertain future as postponed or cancelled orders are expected.