KATHMANDU: Statistics prepared by the Karnali State Police Office (KSPO) show a high incidence of drug abuse in Karnali Province in the past three fiscal years. 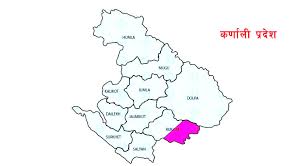 According to DSP Loknath Timsina, Spokesperson for the KSPO, different awareness programs launched in the province have made locals understand the importance of reporting drug abuse cases to concerned organizations.

Surkhet, the capital of Karnali Province ranks first in the whole province in terms of the number of drug abuse cases recorded in the last three fiscal years, according to the KSPO statistics.

Drugs are easily smuggled into Surkhet from India because it is not far away from Nepalgunj, a city that adjoins India. This is one of the reasons behind  the highest incidence of drug abuse in the provincial capital, DSP Timilsina said

"Another reason for the high incidence of drug abuse in Surkhet is that it is the capital city of the province," Timsina said. "People now have migrated to the capital in large numbers, increasing the number of drug abusers" he added.

Lalit Bhattarai, President of Bhairab Youth Empowerment Center (BYEC), said that on average 13 to 14 drug users are brought to the BYEC for treatment monthly. "BYEC is capable of accommodating 50 drug-users. But, it is currently offering treatment to a total of 47 drug-abusers only," said Bhattarai.

On average, around five drug abusers rehabilitated by the BYEC are bought to it for treatment again after they start abusing drugs again due to an economic problem they suffer from in post-rehabilitation days.

The BYEC is a Surkhet-based organization established thirteen years ago to rehabilitate drug addicts.

Bhattarai highlighted post-rehabilitation challenges faced by the drug-users. “People are bought here for treatment.  But after they are sent back to their homes, they get frustrated due to lack of options that they think are appropriate for them to earn their livelihood. So, they return to their old habit of abusing a drug,” Bhattarai said.

In addition to rehabilitation of drug abusers, the BYEC also focuses on children education, youth and women empowerment. It also launches awareness programs with a view to minimizing the number of drug abusers in the region.