There are 129 land crossings with India and China. Only 41 will get health desks

The health workers will ask people to remain in self-quarantine if they have influenza-like symptoms, officials say.

In a bid to screen people entering Nepal from neighbouring India and China, the Ministry of Health and Population is working to set up at least 41 health desks at various land crossing points. 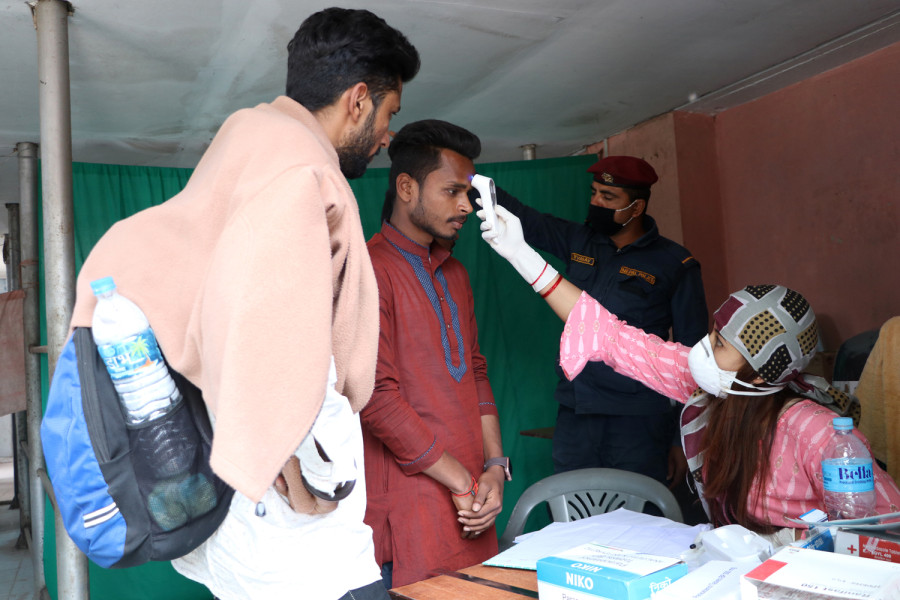 Of the 129 land crossing points with the southern and northern neighbours, health desks will be set up at 41 busy crossing points in view of the global Covid-19 outbreak, according to the ministry.

The health ministry had deployed senior health officials including doctors in all seven provinces some two weeks ago to identify the land crossing points and sensitise the local and provincial health agencies about the risk of a possible outbreak of Covid-19, which is caused by the new strain of coronavirus, now dubbed SARS-CoV-2, which was first detected in December 2019.

"As per the recommendation by a team of experts, we have decided to set up 41 health desks for now," said Shrestha. "We are working to supply basic equipment and materials—laser thermometers, gloves, masks and leaflets, among others—to the health desks."

While China has managed to slow down its spread, the virus has invaded at least 120 countries across the globe including South Korea, Japan, and the Middle Eastern countries, where a large number of Nepalis live and work.

Moreover, a spike in virus infections in India, with which Nepal shares a long open and porous border, has also alarmed health experts.

According to them, the risk of a disease outbreak has gone up following local transmissions in India, as thousands of people both from Nepal and India cross the borders every day.

"The risk of a possible outbreak has not lessened, as cases have been rising in India," said Dr Hemanta Chandra Ojha, an official at the Epidemiology and Disease Control Division. "Local transmissions in India show that the risk still persists even as the weather warms.”

At least 62 people have been infected by Covid-19 in India.

The health ministry has asked local and provincial governments to deploy auxiliary health workers at the health desks.

Common signs of infection include respiratory symptoms, fever, cough, shortness of breath and breathing difficulties, according to the World Health Organization.

Ojha said since the Indian government had stepped up measures and health desks were being set up, there was no need for alarm.

The health ministry has also set up health desks in some busiest tourist destinations like Pokhara, Sauraha and Lumbini.

Dr Basudev Pandey, director at the Epidemiology and Disease Control Division, however, said that services at most of the health desks were not satisfactory.

"We are doing our best from the available resources," he said. "We have increased surveillance, provided training to health workers and alerted all our channels to work seriously to prevent possible outbreaks."

Nepal so far has reported only one case, but health experts warn it is only a matter of time before the country sees an outbreak, as the government agencies have not taken the issue seriously.