DHAMBOJI: The number of tigers in Banke National Park (BNP) has gone up in the beginning of current fiscal year. 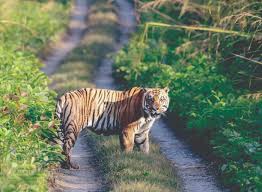 The figure shows a significant rise in the number of wild cats here in the past five years. In the year 2071 BS (2013 AD), there were only four tigers in the park. According to Wildlife Conservation Forum former director general Shyam Bajimaya, presently, the nationwide population of tigers has reached to 235.

Last fiscal year, 100 people visited the park that was established in 2067 BS, said park's conservation officer Bishnu Prasad Thapaliya. Presently, there are a total 54 cases-- 37 in the court and 17 registered in the park office-- relating with the wildlife poaching , other crimes and smuggling. The park last fiscal year had lost 72 animals to road accidents and this figure was 45 in the previous fiscal year. Similarly, 431 animals were rescued last year.