Tourist arrivals up by 39 per cent

KATHMANDU: Tourist arrivals to Nepal posted a year-on-year growth of 39 percent in February. According to data compiled by Department of Immigration (DoI), a total of 124,421 foreign tourists visited Nepal in the review month. While 97,694 international visitors entered the country by air, remaining 26,727 entered the country from border points. 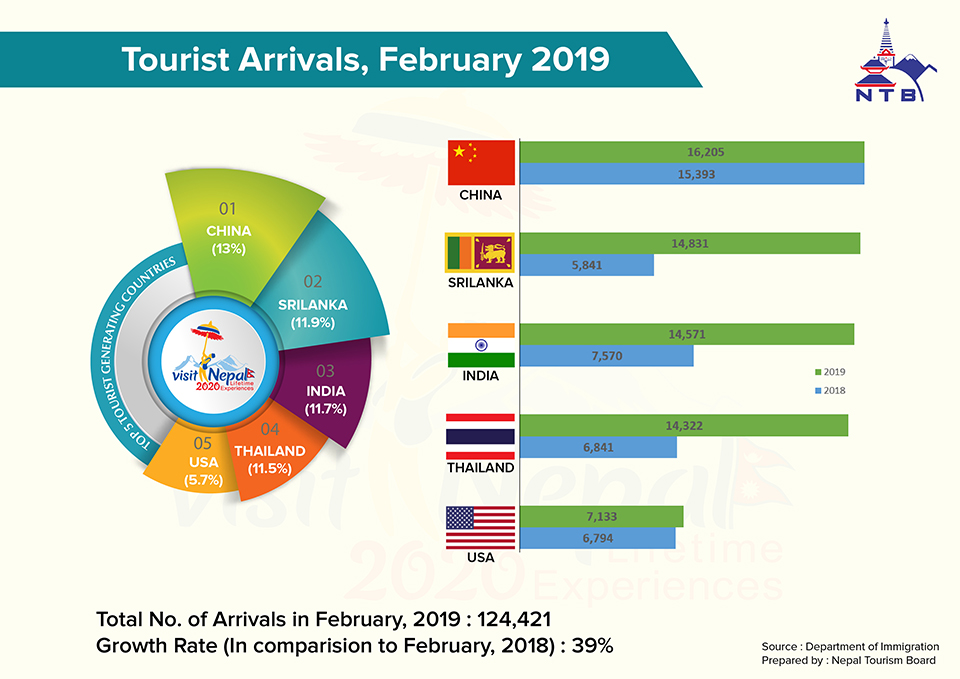 Cumulative arrivals over the first two months of 2019 were up by 33 percent compared to arrival figures in the same period last year, according to a statement issued by the Nepal Tourism Board (NTB).

Foreign tourist arrivals had recorded a growth of 25.4 percent year-on-year in January helped by encouraging tourist falls from India, China, the US, Thailand and Japan. Nepal had welcomed 91,793 foreign tourists in January including 14,493 overland tourists.

Though tourist arrivals figures are growing at a healthy rate, even it will not be sufficient to meet the target of welcoming 2 million tourists by 2020 which is being celebrated as Visit Nepal Year 2020 campaign.

Total arrivals from Indian recorded an astounding growth of 92.5 percent to 14,571 in February, compared to arrival figures of the same month last year.

Similarly, a total of 14,831 Sri Lankans visited Nepal in the review month. "Overall arrivals from SAARC countries registered a sturdy growth of 85 percent over the same month last year with 31,831 total tourist arrivals," the NTB said in the statement.

However, arrivals from China recorded a decline of 5.3 percent in February. A total of 16,205 Chinese tourists visited Nepal in February.

Similarly, arrivals from Thailand, Japan and South Korea in February have also increased by 109 percent, 20 percent and 47.2 percent, respectively, in comparison to 2018.

Arrivals from Europe also surged in February helped by healthy growths from key markets. Nepal welcomed 5,268, 3,340 and 1,978 from the United Kingdom, Germany and France – a growth of 8.7 percent, 27.9 percent and 7.6 percent, respectively. According to the statement, total arrivals from Europe increased by 11.6 percent to 17,789 in February.

Total tourist arrivals from the US also posted year-on-year growth of 5 percent year to 7,133 in February. Similarly, tourist footfalls from Australia increased by 17.4 percent to 2,978 compared to arrival figures of February last year.

China and Sri Lanka overtook India to become largest source market for Nepal in February.
Commenting on the robust growth in tourist arrivals, Deepak Raj Joshi, CEO of the NTB, attributed the growth to massive promotional efforts of the NTB and the private sector.

"The target of welcoming 2 million tourists by 2020 looks realistic," he said, adding that the NTB will continue its promotional crusade in the international market in the days to come.