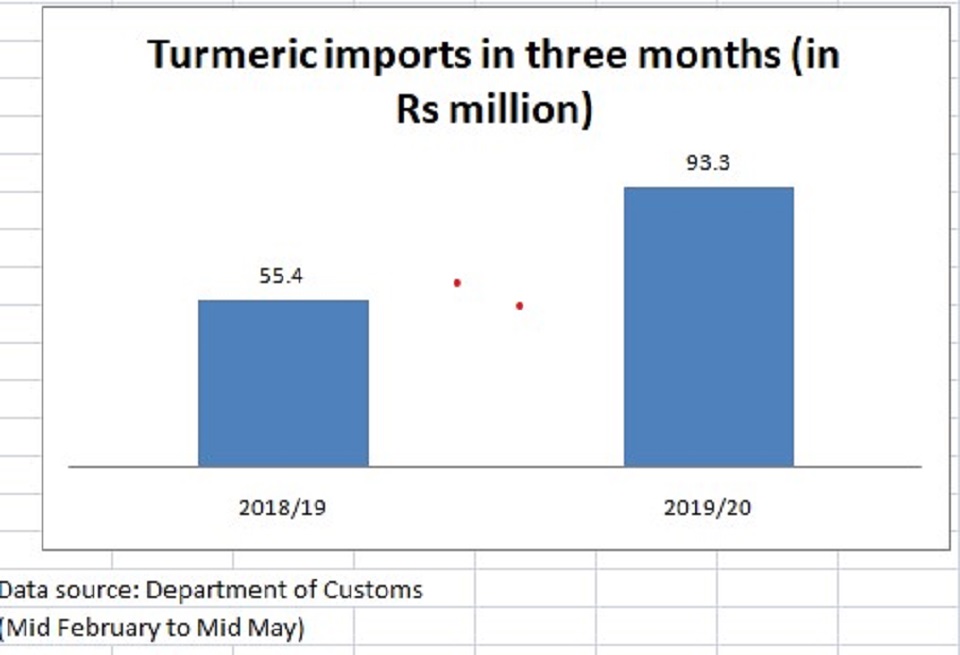 KATHMANDU: The import of turmeric, a spice widely used also as a homeopathic medicine, escalated by almost four-fold during the one-month period from mid-April to mid-May amid widespread threat of the coronavirus in the country.

The records maintained by the Department of Customs (DoC) show that Nepal imported the spice worth Rs 50 million during mid-April and mid-May of 2019/20 compared to Rs 13.88 million in the review period in the previous fiscal year. Turmeric is one of the widely used ‘homeopathic medicines’ by the people,  mainly as a cure to flu-like diseases.

Amid the ongoing threat of the coronavirus disease (Covid-19) and the unavailability of an authentic medicine for its cure, a lot of people are found to have been increasingly attracted to homeopathic medicines. The government’s failure to set up well-equipped quarantine shelters and the lack of assurance for proper medication for the pandemic have also compelled the people to depend on such traditional medicines that have been used since time immemorial.

The outbreak of the Covid-19 was traced for the first time in December, 2019 in China. The first case in Nepal was confirmed on 23 January 2020 when a 31-year-old student, who had returned to Kathmandu from Wuhan on 9 January, tested positive. The disease has now claimed 23 lives while leaving over 9,000 people infected in the country. Of late, new cases have been escalating rapidly on a daily basis.

The DoC statistics shows that the country’s import of turmeric went up 68 percent during three months ending mid-May. During this period, many countries including Nepal had enforced nationwide lockdowns targeting to minimize the threat of the pandemic. In these three months of the current fiscal year, Nepal imported the spice worth Rs 93.30 million compared to an import worth Rs 55.40 million in the review period last year.

Speaking at a number of public forums, Prime Minister KP Oli has been claiming that the death toll from the coronavirus is very low in the country mainly due to the Nepali people’s strong immunity system built mainly because of their food consumption habits. However, he has consistently been criticized on the ground that the government’s claim is aimed at covering up its inability to provide proper medical services to protect the people from the disease.

Despite being an agrarian country, Nepal’s dependency on imported agro products has been growing year on year with a decline in domestic production. The government’s failure to implement its commitment to make the country self-reliant in a number of agro products is attributed to the draining out of the foreign currency earned mainly from remittances.

The department’s data shows that Nepal imported turmeric worth Rs 279.51 million in the first ten months of this fiscal year, up by 41 percent in the same period last year. In 2018/19, the import of turmeric stood at Rs 261.96 million.