The Upper Trishuli 3A and Upper Bhotekoshi hydropower projects are finally set to generate 753.2 million units of electricity worth Rs6.29 billion annually, after surmounting a series of setbacks thrown up by natural disasters and delayed construction. 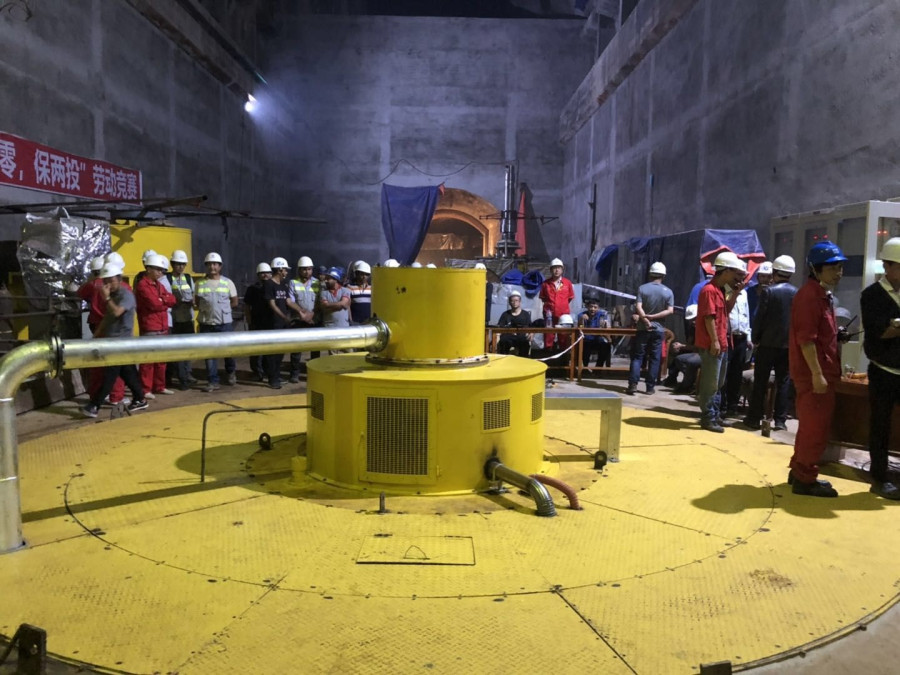 Prime Minister KP Sharma Oli and Minister for Energy, Water Resources and Irrigation Barshaman Pun jointly inaugurated the plant by switching it on from Kathmandu and Rasuwa respectively.

According to Kulman Ghising, managing director of the Nepal Electricity Authority, the scheme is also the largest to come online this year. It holds strategic importance in terms of the contribution of energy to the national grid as it can churn out 45 megawatts of electricity even during the winter, he said.

“Upper Trishuli 3A can fulfil around 8 percent of Nepal’s power demand, allowing the power utility to cut back on energy imports from India during the dry season,” said Ghising. “As the load centre of the plant is near Kathmandu, it will ensure a reliable supply of electricity to the federal capital and the national grid.”

With a majority of the hydel schemes being run-of-the-river types, the country witnesses a slump in electricity generation during the winter when the water level in the rivers goes down, forcing it to import power from India.

As per the Nepal Electricity Authority, the country bought 2.8 billion units of electricity costing Rs22 billion from India during the last fiscal year.

Initially, Upper Trishuli 3A was planned to go online in 2014, but work came to a grinding halt following the earthquake in 2015 which ravaged the under-construction dam and the access road to the project.

Construction work resumed after a two-year break in 2017 after the cabinet mobilised the Nepal Army to prevent further damage by landslide and rebuild the access road at a cost of Rs690 million.

The project was built with funding from the government and a concessional loan of $114.7 million from the Export-Import Bank of China. The cost of the project when it was completed had swelled to Rs17.32 billion from the initial estimate of Rs14.43 billion.

Construction work was also hit by disputes over the location of the powerhouse and increasing the installed capacity from 60 to 90 megawatts. Following the row, the project revised the completion deadline to June 2016 which passed without the plant nowhere near being ready. Generation tests could only be started in May this year.

In addition to building the plant, the Nepal Electricity Authority has concluded the construction of a 220 kV Trishuli-Kathmandu double-circuit transmission line.

According to project officials, a 1.4-kilometre section of the 48-kilometre long transmission line has been installed underground at the Matatirtha substation in Kathmandu.

Apart from relaying the power produced by the Upper Trishuli 3A project, the Nepal Electricity Authority plans to use the transmission infrastructure and the facility at Matatirtha to transmit electricity produced by other hydropower schemes in the Trishuli corridor.

“At present, we are running generation tests on both units,” said Bikram Ratna Sthapit, chief executive officer of Bhotekoshi Power Company. “We expect to begin commercial operation next week, but the plant's output will depend on the water level in the river with the dry season coming up.”

The 2015 earthquake and subsequent landslides and floods battered the plant to the point of requiring a major overhaul. Chinese contractor Sino Hydro began the reconstruction and replacement of the civil, electronic and hydro mechanical structures in 2018.

The company spent around Rs7 billion on the plant's repairs which has an expensive dollar-denominated power purchase agreement with the state-owned power utility.