What’s in a name? Sometimes, everything

An effort to restitute indigenous names would surely reveal countless examples of cultural approximation all over Nepal. 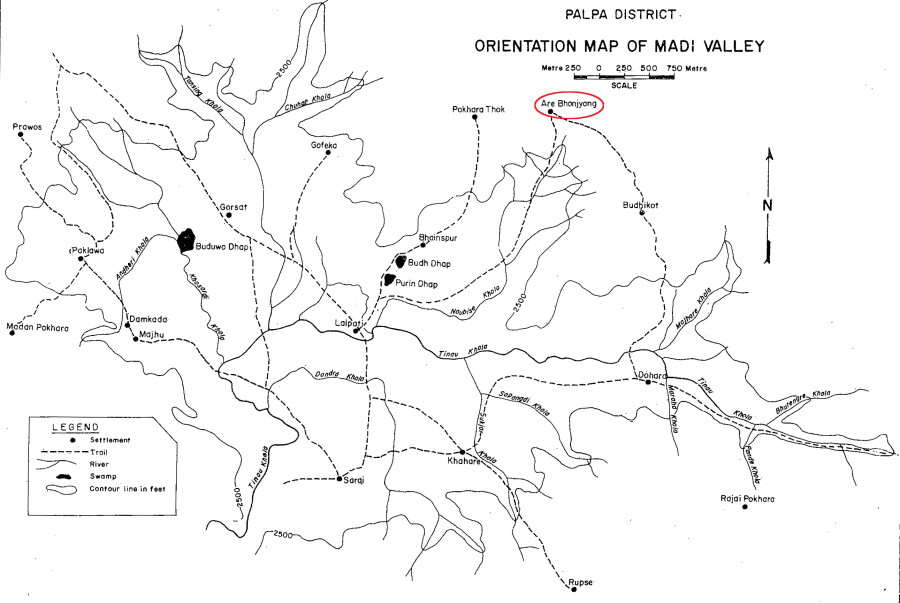 In my last column, I had mentioned how the earlier VDCs of Budhabare and Shantinagar in Jhapa district had been merged during the reorganisation of local bodies to become Buddhashanti Rural Municipality. It was my friend from Ilam, Kedar Sharma, who had told me about this hybrid name that had managed to erase the history of the origin of Budhabare. Since the road to Ilam cuts through the municipality, it probably is a periodic assault on the senses of people like Kedarji, who pine for the old name of Budhabare with all its rich history of a shifting marketplace that used to be common in eastern Nepal.

I mention my friend here since it was he who had told me years ago about how the corruption of the names of two other places had ended up giving a connotation quite different from the original: Are Bhanjyang in Palpa and Arung Khola in Nawalparasi. Both places straddle major highways and thousands would pass through them every day, but most people would not even recognise these names as such since they are now called Arya Bhanjyang and Arun Khola. Every time I have passed these places since then, I remember Kedarji fuming over the loss of these old place-names and often wonder if the past would ever be reclaimed.

It was some years ago that I chanced upon an article by Kamal P Adhikary, an anthropologist at the University of Texas at Austin. ‘The Fruits of Panchayat Development’ had been published in 1995, around the same time as Kedarji was enlightening me about Are Bhanjyang and Arung Khola. By coincidence, Adhikary also uses the same two examples while discussing how the Panchayat discourse on nationalism and development was an attempt to instil a feeling of a common Nepali nationhood among the people. He writes: ‘Government officials replace old non-Nepali place names with Nepali sounding names in the context of development. For example, when inaugurating a post office at Arebhanjyang, the name was changed to Aryabhanjyang. Are does not mean anything in Nepali, whereas Arya is truly Nepali because it means the best people [i.e. Aryans]. Similarly, when inaugurating a newly constructed bridge the river’s age-old name Arung was changed to Arun, invoking the sun to glorify the place.’

As a native of Palpa, Adhikary knew that Aryabhanjyang did not exist until recently. Besides the memory of old-timers, evidence abounds of the old name, such as the accompanying map from a 1983 journal article by a college teacher in Tansen. From his everyday interactions with his Magar friends and neighbours, Adhikary would also be very aware that while are might not mean anything in Nepali, it certainly does for the majority Magars in the area. And, as they will tell anyone who cares to ask, are comes from the Magar aryek, which is garlic—a crop that apparently used to be grown in abundance there.

Likewise, with Arung Khola, as I was told by an informant, it got its name from the simple three-stone cooking stoves, the arung in Magar, that littered the riverbed when Magars from the hills to the north descended during their annual trips to procure salt from the plains. Although known almost universally as Arun Khola, the name lives on locally such as in the Janata Secondary School, which lists its address as ‘Arungkhola, Nawalparasi’, the Shree Aarungkhola English Secondary School and the Arung Khola Hydroelectric Project. Most indelibly, it lives on in geological studies of Nepal, with one of the rock formations in the region called the Arung Khola Formation, leading to patently awkward sentence constructions such as ‘the Arung Khola formation in the Arun Khola’. But, by now the transition from ‘Arung’ to ‘Arun’ has been so complete that for the Wikipedia entry the author decided that Arungkhola is only a ‘nickname’ of Arunkhola.

In his article from the early 1980s, ‘River-Names of the Nepal Valley: A Study in Cultural Annexation’, the late Kamal Prakash Malla had described three stages of place-names being Sankritised over time: approximation, translation and substitution, with the intensity of ‘annexation’ rising in scale from the first to the last. Of the first kind, he gives the example of Thabahil, which has now become Thamel, where ‘the approximation is only phonetic, not semantic’. An example of translation is Nwakhu (mouth-river), which has become Bagmati, from the Sanksrit (vak=mouth + mati=river). Substitution is the most insidious since it ignores the etymology as well as any cultural, religious or social significance of the old name in favour of one that has a particular resonance for those with the power, whether political or cultural, as when the river Khasankhu that flows by Bhaktapur became the Hanumante.

Following Malla, one can argue that in the case of Are Bhanjyang and Arung Khola, the first and last processes took place simultaneously. The names were approximated in the sense that they sound phonetically very similar. But at the same time, they were also approximated since the new names have nothing to do with the old. Considering how arbitrary these name changes were, the most appropriate way of making amends for a lapse in both understanding and judgement by the authorities of the time would be to restore the names and all the meanings associated with them. If Australia could decide to drop the more than a century-old name, Ayers Rock, for its famous natural landmark in favour of the local Uluru, it should be easy enough for us. Closer home in India, it has been decades since colonial names have been gradually replaced by their original versions.

A concerted effort to restitute indigenous names would surely reveal countless examples of cultural approximation all over Nepal. A start could be made by that most famous of our own natural landmarks, Chomolungma, which as Malla reminds us, ‘was renamed as Sagarmatha, on the basis of a very dubious etymological interpretation by a pundit (i.e., Baburam Acharya)’. The irony is that during the visit of the Chinese president, Xi Jinping, last year, there were banners proclaiming ‘Nepal-China Friendship is as tall as Mount Sagarmatha/Qomolangma!!’. Apart from the superfluous ‘Mount’, it never seems to have struck anyone that the Chinese, despite their equal claim to the mountain had long adopted Chomolungma (with the ‘q’ in ‘Qomolangma’ pronounced ‘ch’), the local name used for the massif on both sides of the border. With our prime minister making public exhortations for everyone to call the mountain Sagarmatha, showing little regard for local history and sensibilities, there is very little likelihood of our following the Chinese example. Someday some social scientist will surely write about ‘the fruits of Oli-led development’, and the similarities between that and the Panchayat one will be hard to miss.