Who runs the world? Girls

In a quiet and leafy cul-de-sac of a side street in Bag Bazar, five generations of women live together and continue to inspire each other every day. 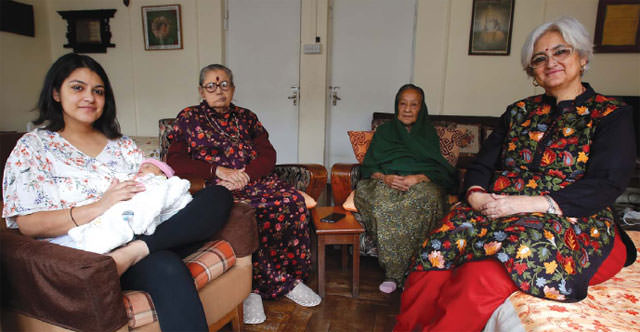 NO GENERATION GAP: Five generations of the Joshi family (from left to right) with Priya with Kaabya on her lap, Angur Baba, Chandra Kumari and Rupa Joshi.

Chandra Kumari Joshi is 103 years old and learned to read and write at a time when educating girls was regarded as unnecessary. Her daughter-in-law Angur Baba Joshi is a prominent social activist and as the founder of Padma Kanya College, a pioneer in higher education for women.

Her grand daughter-in-law Rupa Joshi is Head of Communications at UNICEF Nepal, and her great grand-daughter Priya Joshi was a wildlife researcher who gave it up to teach women to make things through her Maker Keti initiative. The family recently welcomed a new member, Priya’s 3-week-old daughter, Kaabya Siddhi Bajracharya. 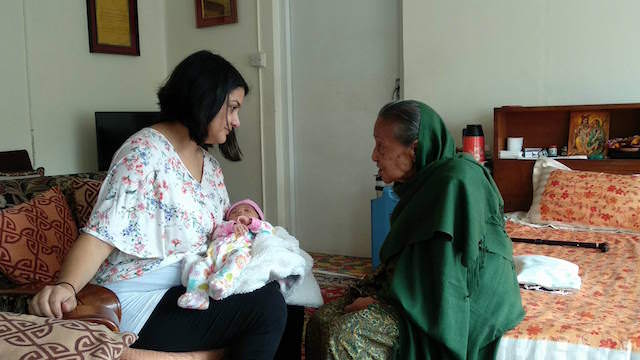 All the high-achieving, independent women in this multi-generational clan credit the education they received and family support as the reason they succeeded.

“Women need to be educated because they are the ones who run the world,” explains Chandra Kumari, whose father Badaguruju Bishwa Raj Pandey made sure all his nine daughters received the same education as his only son.

Chandra Kumari was 15 when she gave birth to her son in 1930, the year she became a widow. When the time came for her to find a bride for her eleven-year-old son, she welcomed nine-year-old Angur Baba into the family.

“I promised her father I would bring her up as my own daughter,” remembers Chandra Kumari, still sprightly and sharp despite her years.

Even when others in society told her that educating girls would bring her misery, she made sure her daughter-in-law received the same opportunities as her son. She adds with a glint in her eyes: “I am a stubborn person and was adamant that she go to school.”

Despite Kathmandu’s patriarchal culture, Angur Baba Joshi persevered and became the first Nepali woman to get an LLB from Banaras and a BL from Oxford University.

When she returned to Nepal, she was appointed principal of Padma Kanya, becoming the first woman in the country to head a school college. She went on to groom an entire generation of women.

“Women create life. She is responsible for the upbringing of the child. It is imperative that the mother is cultured, educated, and empowered,” says Angur Baba.

Rupa Joshi was barely 17 when she was married, and a year later became a mother. “I was perfectly happy staying at home but they pushed me to pursue my studies,” she recalls. Rupa went on to do her masters in journalism from the University of Southern California.

While Rupa was away in America, Chandra Kumari took care of her great grandchildren like she had done so many years ago with her own grandchildren. “It was easier for me to concentrate on my studies knowing that my children were in good hands back home, without that support, backup and understanding, it wouldn’t have been possible,” she adds.

Growing up, Priya Joshi never felt the pressure to become a doctor or an engineer. “My siblings and I had the freedom to choose what we wanted to study,” she says. “I am lucky to have the experience and lessons from so many generations. And now my daughter will hopefully have the same,” she adds, as Kaabya sleeps soundly on her lap.

The women all agree that it was education that made the family what it is today. Says Rupa: “Education teaches you to respect each other’s point of view and thoughts, whether it is from a daughter-in-law to a mother-in-law or vice versa. That is one reason we live together in such harmony.”