Wi-Fi service to be provided at trekking, pilgrimage destinations

Annapurna Circuit and Everest Base Camp are among the destinations to get Wi-Fi service.

The Nepal Telecommunications Authority has set in motion an ambitious plan to provide ‘speedy and reliable’ wireless fidelity (Wi-Fi) services at the country's key trekking and pilgrimage destinations. 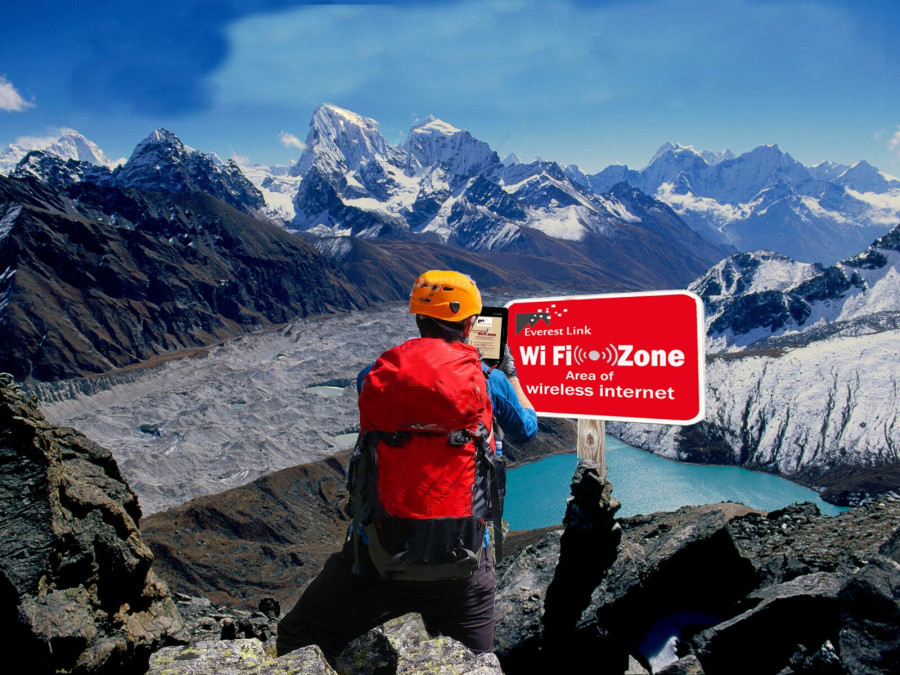 Contractors vying for the Rs180-million project are expected to install and operate Wi-Max and Wi-Fi connections with a dedicated bandwidth of up to 40 Mbps at 22 places around the Annapurna massif including the Muktinath Temple and Thorung La situated at an altitude of 5,416 metres.

The internet service providers undertaking the project are also required to deliver Wi-Fi services in 10 areas on the Everest Base Camp route, and relay 25 Mbps in Lukla and Namche, 20 Mbps at the base camp, and 10 Mbps at other points with difficult geo-location.

According to the telecom regulator, with the introduction of Worldwide Interoperability for Microwave Access (WiMAX) and 4G services, some tourist destinations are connected, but the connection speed and reliability are major concerns.

“The Nepal Telecommunications Authority has planned the expansion of internet coverage in these places. The selected licensed operator will have to provide more than 512 Kbps broadband connectivity per Wi-Fi device, and the installation of services must commence within one month from the date of the contractor selection,” the regulator said.

The move to provide Wi-Fi service at tourist and pilgrimage sites comes four years after the government issued the Information, Communications Technology Policy which explicitly states that connectivity infrastructure and services will be expanded in all major tourist destinations across the country.

To achieve the vision, officials say, the project has been divided into three packages: Annapurna, Everest Base Camp and religious sites.

“The project has been divided into separate packages as a cost-effective measure, and the contract can be awarded to a single low bidder or separate bidders with minimum price citations for respective packages,” said Min Prasad Aryal, spokesperson for the Nepal Telecommunications Authority.

“A business modality to operate the service is yet to be finalised. But there is a period of free service obligation that requires operators to relay free Wi-Fi for a certain time and impose charges for additional use.”

However, the service providers have been forbidden from imposing charges greater than the average rates in the federal capital, and they must post at least one ‘Free Wi-Fi Logo’ within coverage areas.

“Outdoor spaces, public spheres and walking stretches can be considered for Wi-Fi coverage,” said the Nepal Telecommunications Authority. “A clear and concise description of all rates must be prominently made known to the selected licensed operators’ customers."

The Wi-Fi project is envisaged to be a major boost to tourism and enhance the efficiency of rescue operations, travel entrepreneurs said.

“Although telecom operators have been providing mobile broadband services in certain regions of Annapurna and Everest Base Camp, tourists can be seen scrambling to find corners with coverage because of low penetration and reliability of connections,” said Gourav Basnet, founder of MountainKick, a Kathmandu-based travel operator.

“Also, personnel involved in rescue missions also deal with communication lags and breakdown affecting the effectiveness of such vital tasks because of poor network coverage.”

According to Basnet, enhancing communication and connectivity in tourist destinations through reliable Wi-Fi service will help promote tourism and also fulfil the needs of travellers who want to remain connected and updated while undertaking high altitude treks.

As per the project plan, the telecom regulator wants to commission 50 percent of all the stations under each package within four months from the date of commencement of the project, and equip 100 percent of the sites with internet systems within six months after commencement.

According to Aryal, the regulator plans to initiate the project by December and execute it by the end of the fiscal year 2019-20. However, the availability of reliable electricity supply to install and run the Wi-Fi systems can throw the regulator’s project schedule haywire, besides jacking up costs and data tariffs at certain isolated regions along the trekking routes.

“Power supply can be a challenge at different places as there are places where they do not have grid supply and rely on solar power,” said the Nepal Telecommunications Authority. “It is possible to provide Wi-Fi service in these areas, but reliability might be a challenge along with the cost of deployment.”

The regulator has also proposed to appoint an independent consultant to monitor and evaluate work performance of the appointed internet service providers, and release payment in tranches upon verification.

The final tranche of 10 percent of the total amount is proposed to be disbursed after the Wi-Fi systems in all stations and sites go into operation for a minimum period of 90 days, provided that minimum quality standards have been maintained.

According to the regulator, the licensed operators undertaking the project may construct all facilities required to provide Wi-Fi service or use facilities of existing internet and telecommunications service providers and persons.

As of July, there were 114 rural and urban licensed internet service providers, but only 39 of them were in operation across the country.

Internet service penetration stands at 65.87 percent with a few months remaining for the government deadline to connect 90 percent of the population by 2020 under the much-hyped Digital Nepal campaign runs out.

Out of the total subscribers, 51.64 percent use mobile broadband services, 0.83 percent are connected to wireless facilities, and 13.41 percent have fixed broadband connections.