NEPAL IN DATA INTERVIEW WITH GAPMINDER

On November 13, 2017, Bikas Udhyami's Nepal in Data team, with the technical assistance of the Central Bureau of Statistis and organized the 'Nepal in Data Evening: Connecting Nepal's Development Dots' at Ashok Palace in Patan. The event was supported by thee Data for Development Program implemented by The Asia Foundation and Development Initiatives with funding from the UK Department for International Development (DFID) in Nepal.

The event aimed to promote the use of data among young people and other audiences in Nepal and was attended by more than 300 participants primarily youth. Following a panel discussion and a showcase of several of the videos produced by Bikas Udhyami as part of their Connecting Nepal's Development Dots series on youtube, the event featured an interactive Guest Lecture and Excerise by Olof Granström, Project Manager, and Fernanda Drumond, Head of Operations, from Gapminder.

Gapminder is a Swedish 'facttank' that is fighting devastating misconceptions about global development. Gapminder was co-founded by Hans Rosling, a world renowned statistician who through his interactive data visualizations and presentations was able to garner people's  interest in data and statistics around the world and who sadly passed away earlier in 2017.

In the highly engaging lecture and excercise by Olof and Fernanda, the audience's knowledge on three key misconceptions about the world was put to the test with the help of polling devicies and their perceptions on how people with different income levels around the world live were challenged using Gapminder's dollarstreet photodatabase. 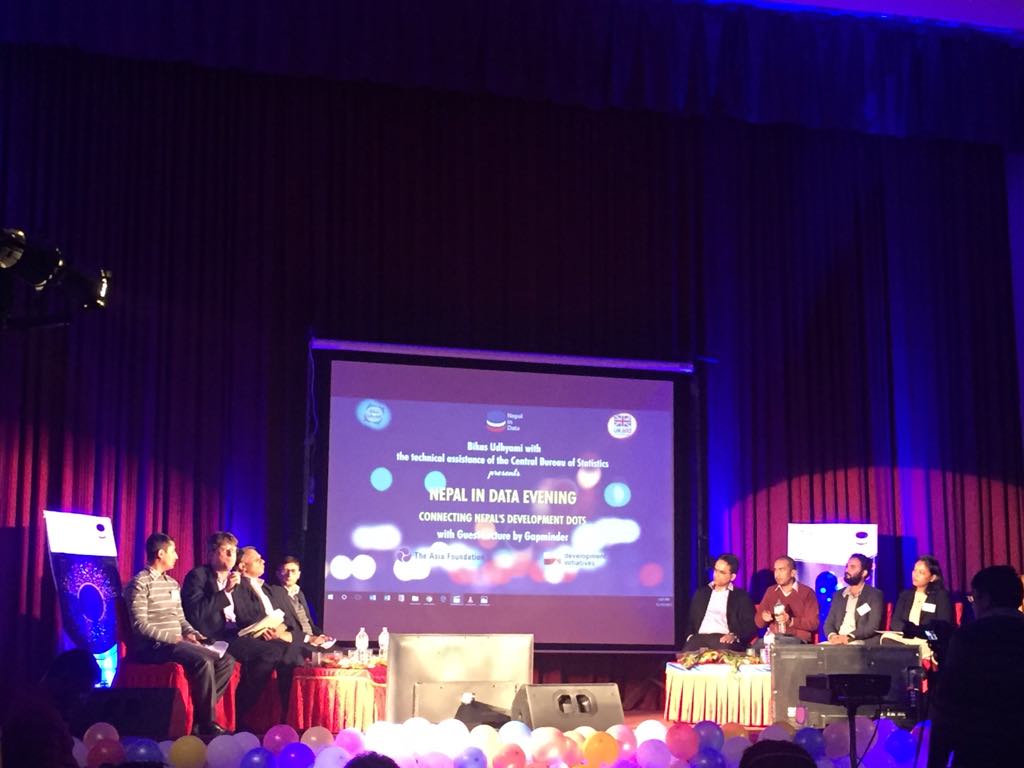 The Nepal in Data team caught up with Olof and Fernanda to ask them some more questions about the work of Gapminder and their personal motivations for choosing to work in the field of data and statistics.

How did you end up working for Gapminder and what were your motivations?

Fernanda: In 2011, I was living in Kathmandu with my husband, in Dhumbarahi. I had already seen Hans Rosling's videos before, and I used them with my students as I taught them the importance of visualising data.  One evening after dinner, I was browsing Gapminder's site and decided to click  this video: Religions and Babies. He explains in this video how the world population will increase until 2100, even though the number of children per woman is no longer increasing. He shows why this will happen using boxes on stage. I found that explanation quite brilliant! I told my husband  that evening: I want to work with this guy! A few months later I got accepted to a Master's programme in Sweden, and immediately I thought: Gapminder is in Sweden, I want to work there! When the Master's programme started I learned that I would have to do a mandatory internship. And of course, I applied at Gapminder. By applying I mean that I sent them an email explaining my skills and motivation to work there. Ola Rosling, the director, send me a test online, to create a bubble graph with sub-national data from India. He liked my test and hired me as an intern to collect datasets with sub-national data. I later worked also with surveys and even as Hans Rosling's assistant. And now here I am, Head of Operations at Gapminder, trying to help others to get a fact-based worldview.

Olof: I had been working in the educational sector for a long time and the message that Gapminder promotes is essential in education. We all need a worldview based on facts. I was actually with one of my friends, who watched the Hans Rosling lecture many years ago and contacted him afterwards. They kept in touch with Gapminder for many years afterwards and then I contacted Gapminder together with my friend as we both  saw the need for Gapminder’s mission both within and outside the educational sector become even more important. So  we offered our services and here we are now- both working for one of the most important visions in the world. 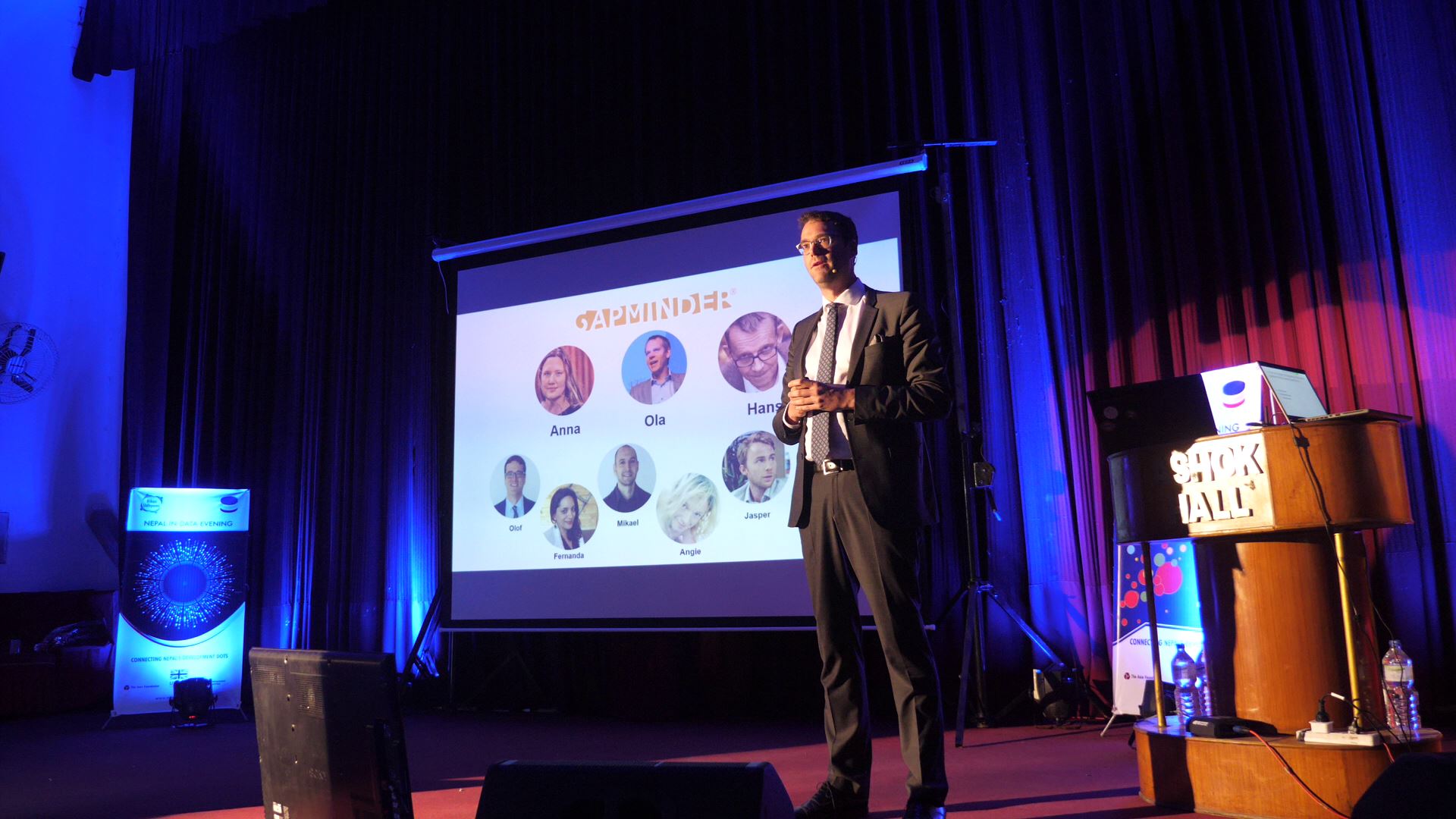 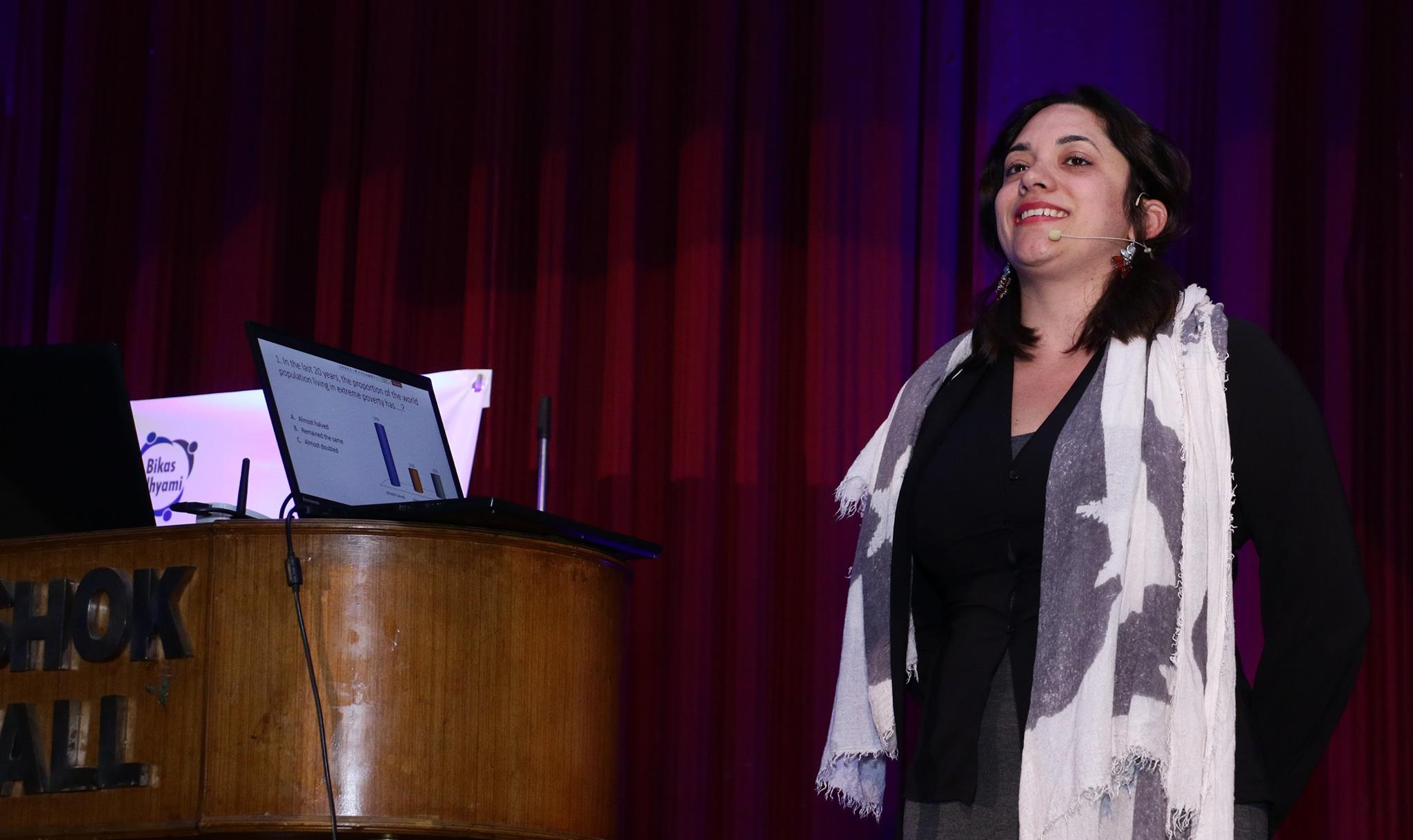 What do you hope to achieve with your work?

Fernanda: I hope that the Ministry of Education (or equivalent) of each country understands the importance of teaching global trends for understanding our past,  our present and future prospects. That way, it will be mandatory for schools curriculas to cover global trends and use statistical evidence.  When that happens, children will then start developing a fact-based worldview early in their lives.

Olof: Their are so many things, but one thing that I would like to achieve is that we  become more humble about our lack of knowledge when it comes to so many things. If more people would just say,’ I don't know. but I will find out’. But for that to happen we need to learn some basic frameworks about global development for example and recognize some of the ways our brain is tricking us into making decisions based not on facts but feelings, opinions and plain guesses. Then we take those “decisions” as if  they are fact-based, when they are not.

What is your favorite Gapminder topic to present and why?

Fernanda: I completely love presenting Dollar Street! I've been managing Dollar Street for a couple years now, and I've been following it since the beginning. Oh, the things you learn by digging in the details of eachfamily! And how amazing it is to read the questionnaire and discover people's dreams and achievements! I love it! What a humbling experience it is! It connects me to my experiences visiting my family's homes in the countryside of Brazil. I used to consider them very poor until lived in India. After living in New Delhi, I discovered another level of poverty. After moving to Nepal, yet another level. And after seeing Dollar Street, it's astonishing to discover that my worldview has been completely wrong way this time! I love talking about this; trying to convey that experience to others is simply amazing!

Olof: I love to give people a more nuanced view of the world. Everything is not black or white. There have been huge improvements, but there are still people living in extreme poverty. To make decisions that will actually lift the “bottom billion” out of poverty and establish a sustainable future we all need to make decisions concerning the world on facts, because many of us make those decisions when we vote and in our daily consumption. 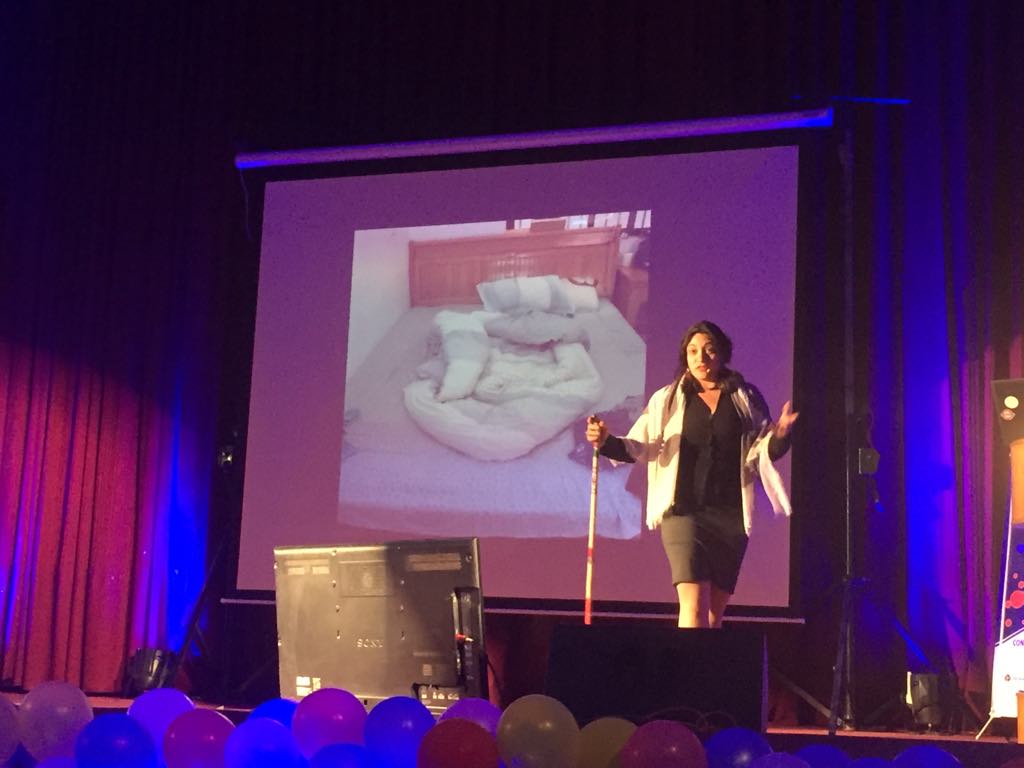 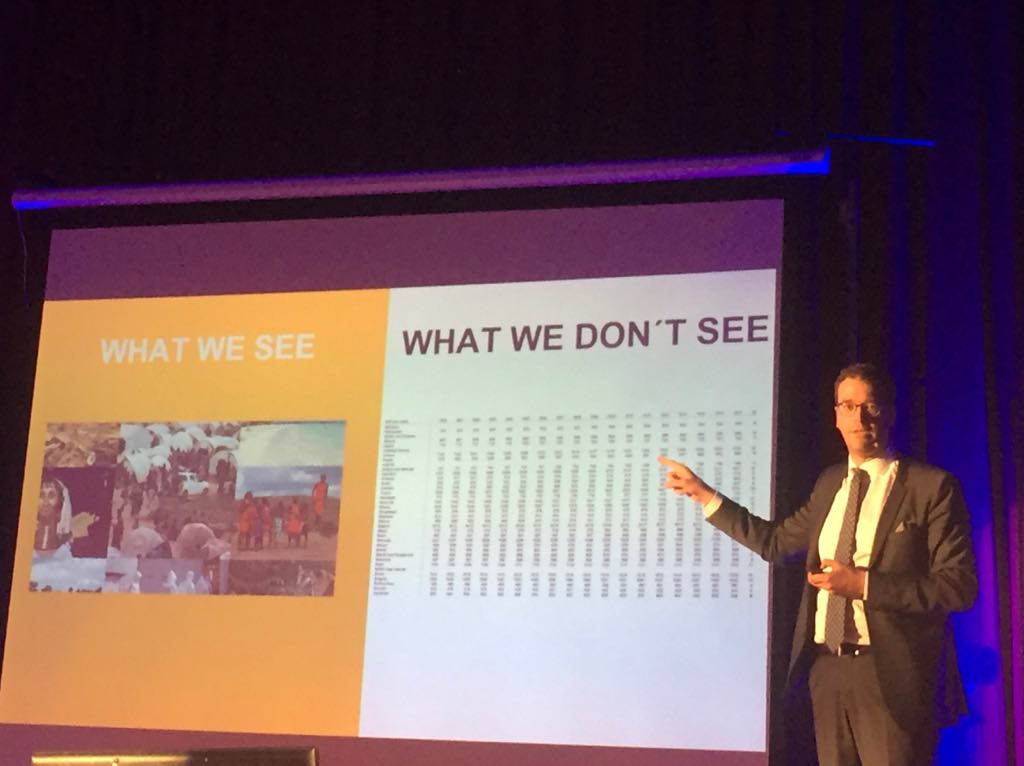 If you look at Nepal’s development scenario, what do you think are the biggest misconceptions that exist?

Fernanda: In my opinion, the largest and most dangerous misconception shared by friends and family in Nepal is the belief that it needs foreign aid in order to develop further. Nepal is indeed a low income country, but it has progressed so much in the last 30 years that it's impossible not to notice. In fact, even in the last 5 years, since I moved out of Nepal to come to Sweden, I already seen a lot of great improvements. As Nepal passes through this political transition now, economic and societal reforms will certainly allow it to improve immensely in all fields by it's own means. Of course, foreign aid is much appreciated, but Nepal can, and already is, progressing a lot on its own.

Olof: Here I have to be humble and say I don't know. I can guess. but I would suggest to look into the questions about misconceptions not only among the inhabitants of Nepal but among humanitarian organizations and also the commercial sector.  And through education correct the misconceptions. The data exist today and we just need to turn it into public knowledge 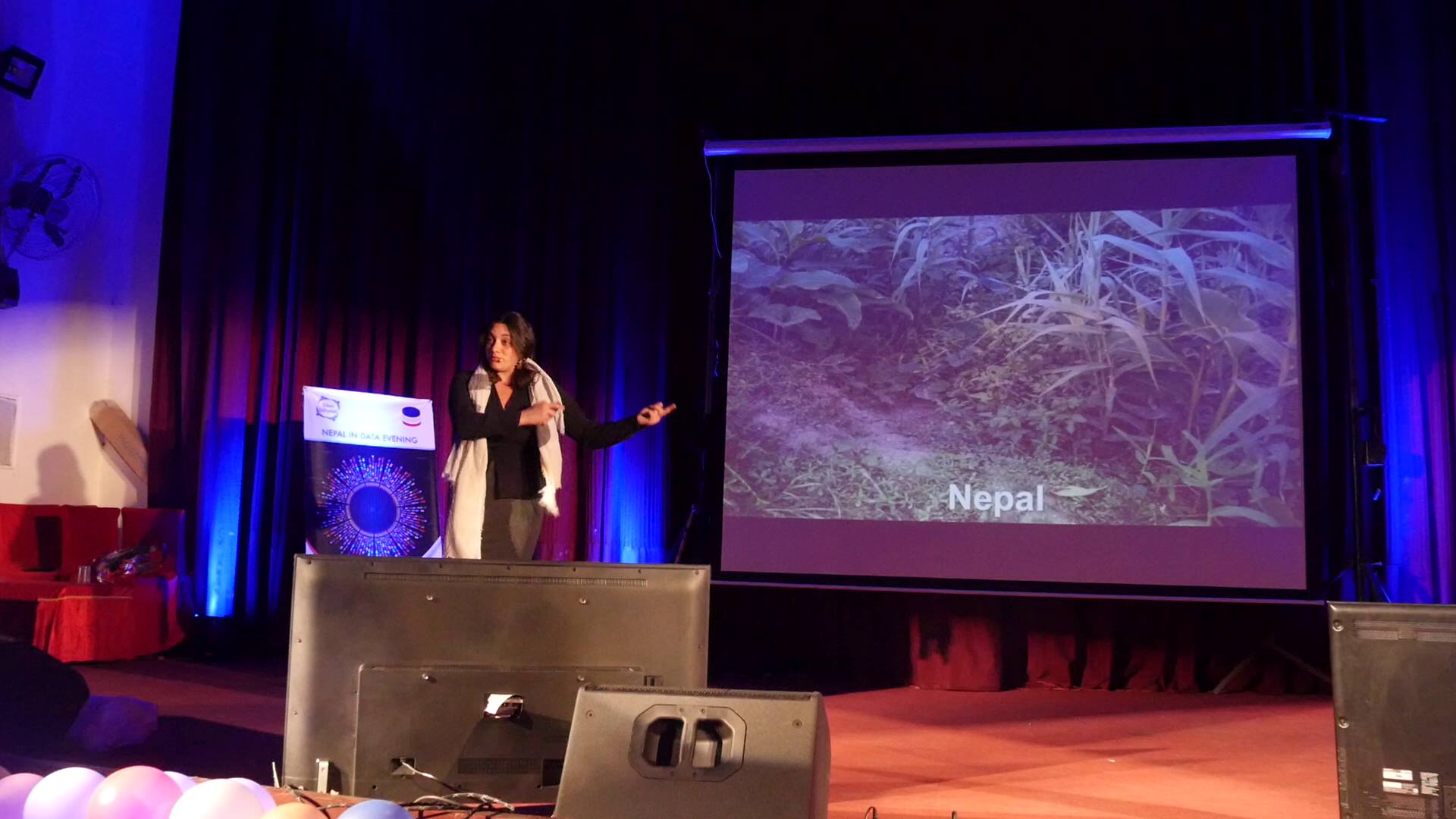 What are Gapminder’s plans for the future?

Fernanda: In 2018 the Factfulness book, written by Hans Rosling, Ola Rosling and Anna Rosling Rönnlund will expand our reach, by providing easy and accessible tools and tricks to the public for pursuing a fact-based worldview. We willl then get much more active in schools by appointing Gapminder Ambassadors, who can act at the local level and influence national curricula in the countries where they live and work.

Olof: To reach out more and give more people not only an insight into their ignorance of global development, but also the knowledge and tools to develop a fact-based worldview.

What message would you like to give to young people in Nepal about the importance of facts and data?

Fernanda: Statistics are not as boring as they sound! By putting numbers in perspective, one can truly start seeing the world in a different lens; a lens that is much closer to reality!

Olof: Statistics are only boring if you don't see the people behind it. You need to both meet people and and use data to make informed decisions. Look at the data,  what story does it tell, meet people, talk to them, the t impression that you get from looking at both will help you understand the world better.

Gapminder is an independent Swedish foundation that serves as a fact tank, not a think tank fighting devastating misconceptions about global development.

The founders of Gapminder are launching the FACTFULNESS book in April. Interested? You can pre-order now at https://buff.ly/2mIgfDr

We are pleased to announce that we will give away five copies of the book amongst our facebook and twitter followers. Stay tuned for more details by following us on: